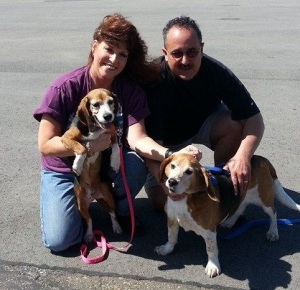 The co-founders of Gray Paws Sanctuary are Darla Poole Brescia and Joe Brescia.

Darla grew up in Latrobe, a rural community east of Pittsburgh, Pennsylvania. She was raised with cats, dogs, kangaroo rats, and even occasionally a few ducks or a raccoon! She always had a love of animals and hands-on experience caring for them.

Joe grew up in a more urban setting – the South Hills of Pittsburgh. The only pet he ever had growing up was a cat that he loved dearly. Joe had no idea what was in store for him when he met Darla in 1999. He always wanted a dog but little did he know he would care for and love nearly 40 dogs in his first 13 years of marriage!

Darla had two dogs when she met Joe and he absolutely fell in love with them! Lab mix Sassy and Schnauzer mix Mindy were soon accompanied by Mr. Mike – an 11-year-old blonde Husky that they adopted together from a local rescue. Darla and Joe have not stopped adopting dogs since then!

During the day – Darla is a Licensed, Master Level Social worker and Chief Operating Officer in a human services non-profit, Auberle. Joe owns and operates a gourmet food business based in Monroeville, PA called Sunrise Foods.

If you want to help ensure that old pups can continue to have a home to call home for the rest of their days, donate to our cause here. You won’t find more adorable recipients anywhere!